Great Bustard Diary: How Does Winter Influence the Behaviour of the Great Bustards? [part 2/2]

The cold season may awaken in bustards the migration instinct. But is migration inherited or learnt? We analysed seven ornithological studies and articles to answer these questions. 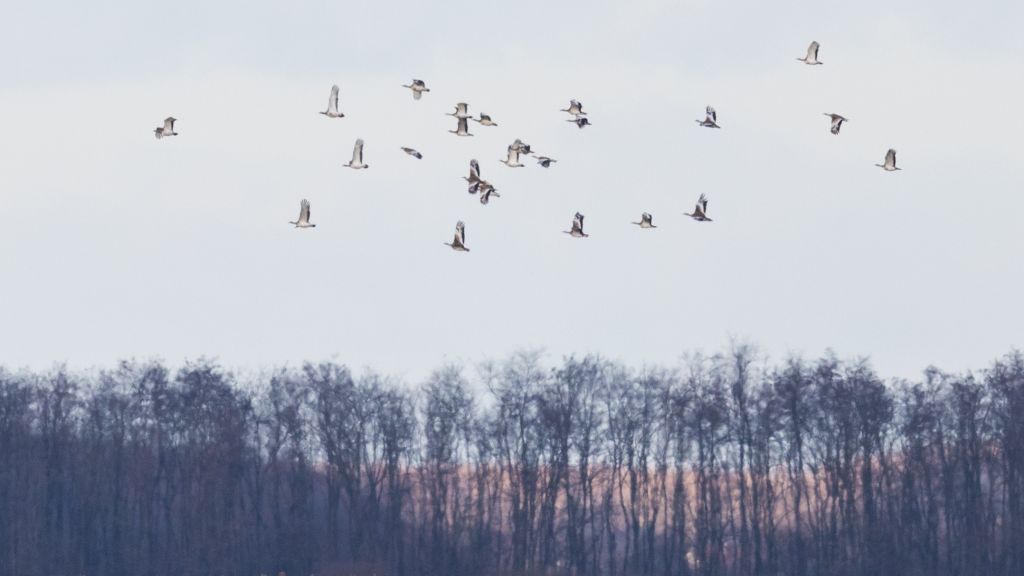 Is migration encoded in the DNA of the species or is it learnt during lifetime?

The Great Bustard Group, a handful of volunteers from Wiltshire, initiated in 2003 a Great Bustard reintroduction project in Great Britain, as the species has been considered extinct within the country since 1832. The volunteers noticed that, in winter, among the first generation of chicks that had been previously brought from Russia, reared on English grounds and later released into the wild, three migrated south. It appeared as if they were following the pattern of their mothers and of other females that travel 1,100 km from Saratov, Russia, to their wintering grounds in southeast Ukraine. Nevertheless, in the following years, no chick has migrated long distances, as they remained in the area where they had been released, in the company of other bustards.

A group of researchers from Spain, where 60% of the world’s Great Bustard population is to be found, has investigated the causes of the partial migration, analysing 190 radio-tagged bustards during their lifetime. Partial migration occurs when a part of the breeding population (and not the entire one) leaves the breeding area.

It has been observed that females change their migratory behavioural pattern because they tended to be sedentary when they had young to attend to, and especially male chicks as it takes them longer to become fully independent. As for the immature females, they either learnt from their mothers within their first winter, or from other females with whom they spent their second winter. As for the males, they migrate in rather great numbers during summer in order to escape the heat of the breeding areas.

As behaviour is passed on from one generation to the other, the researchers have shown that this is a matter of cultural transmission mechanism. Their conclusion was that migration is a complex evolutionary trait, conditioned by the interactions of the individual with the social and environmental factors.

So what is the explanation of the occasional movements that some individuals present?

Satellite tracked birds have shown that they interact with other populations of Great Bustards. The fact that these movements occur before the breeding season is of the utmost importance because it may avoid inbreeding.

In January, a female from Dévaványa flew north in the area of Hortobágy, making a distance of over 40 km. A month later, she has been seen with a drove of 24 females and, much to everybody’s content, not far from them were 29 male bustards. Even now, her journey still continues.

As for the Salonta-Mezőgyán population, during a field visit in the area of Ateaș-Cefa (Bihor county), on 20 January, our colleague Bărbos Lőrinc spotted a flying bustard. It must have been a young male and was recorded at approximately 5-6 km north-east from his usual roosting site.

For now, we can only presume that the young male was looking for better displaying grounds. Nonetheless, these occasional movements fascinate us and illustrate how little we still know about this emblematic, yet enigmatic species.

N.B.: the first part of this article may be read here.