Great Bustard Diary: How Does Winter Influence the Behaviour of the Great Bustards? [part 1/2]

Where are the bustards wintering and how do they cope with the harsh season? We tried to answer to some of these questions analysing seven ornithological studies and articles. 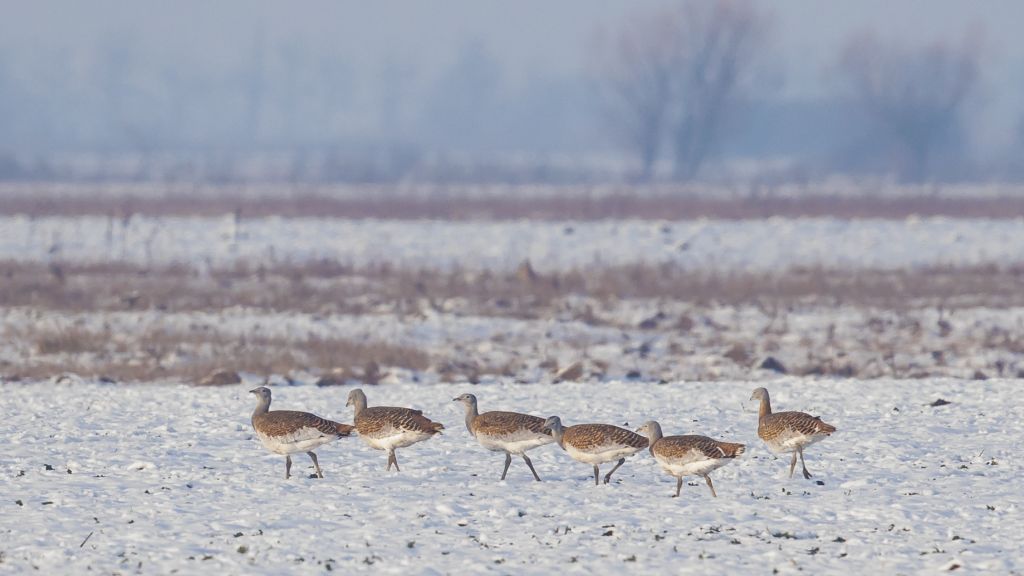 Are the bustards on the run because of winter?

Long-term high snow cover may trigger migration movements in the Great Bustards, shows a study made by a group of German researchers. Analysing the data collected from two populations in Germany, they claimed that the threshold was a cover of at least 5 cm thickness for a period of 21 and 28 days respectively.

Snow limits the access to food as the birds cannot scrape it away in order to get to the oilseed rape leafs, their main food source in winter. On the other hand, snow may compromise their thermal insulation, but also their capacity to fly. Generally at night, as they remain motionless, the melting snow may penetrate their feathers and lose heat. Great Bustards, unlike the majority of birds, lack preen gland, which could ensure waterproof plumage.

Also, it has been observed  that the percentage of facultative winter migratory females (meaning those who choose to migrate in severe conditions) was four times higher than the males’.

The researchers concluded that the facultative migration is a consequence of a negative energy balance, which can be interpreted as an escape-like behaviour.

But what’s actually happening on the biochemical level?

According to a study made in China related to the Asian Great Bustard - Otis tarda dybowskii, the Asian subspecies, snowfalls are considered severe weather events, thus being a stress factor. But how can stress be measured in bustards? The Chinese researchers analysed and compared 239 fecal samples colected during two winters - one with high and the other with low snow cover.

They noticed high levels of corticosterone (CORT – a hormone involved in energy regulation, immune reactions, and stress responses). As for the immune system, they examined the levels of immunoglobulin A (IgA). They observed increased levels of IgA after snowfalls in the low cover winter, and decreased IgA levels after snowfalls during the high cover winter. Thus, severe winter conditions do not only represent a chronic stress factor, but if they persist, they may cause immunosuppression to Great Bustards.

Where are the bustards of the Carpathian Basin wintering?

It is estimated that the global population of Great Bustards is around 44,000 – 57,000 individuals. The greatest numbers of bustards within Central Europe are to be found in Hungary. Conservationists from Kiskunság National Park state that the bustard populations of Hungary show rather a sedentary behaviour, that manifests particularly in the mild or usual (normal) winters when they make (very) short distance migration – no more than 50-150 km, in the east-west direction.

As part of the conservation actions and wintering grounds management, food is provided and feeding sites are cleared of snow cover. Thus, there have been no records for the last 16 years of Great Bustard significant migrations to Southern Europe during severe winters.

As the bustards spend the winter together in great numbers, separated by their sex - males in one group, and females with chicks in another - makes it relatively easy to find and count them. The winter census of this year, which was performed simultaneously in the Carpathian Basin, showed that in this area live over 2,200 bustards, out of which 37 were counted in the area of Salonta, Romania.