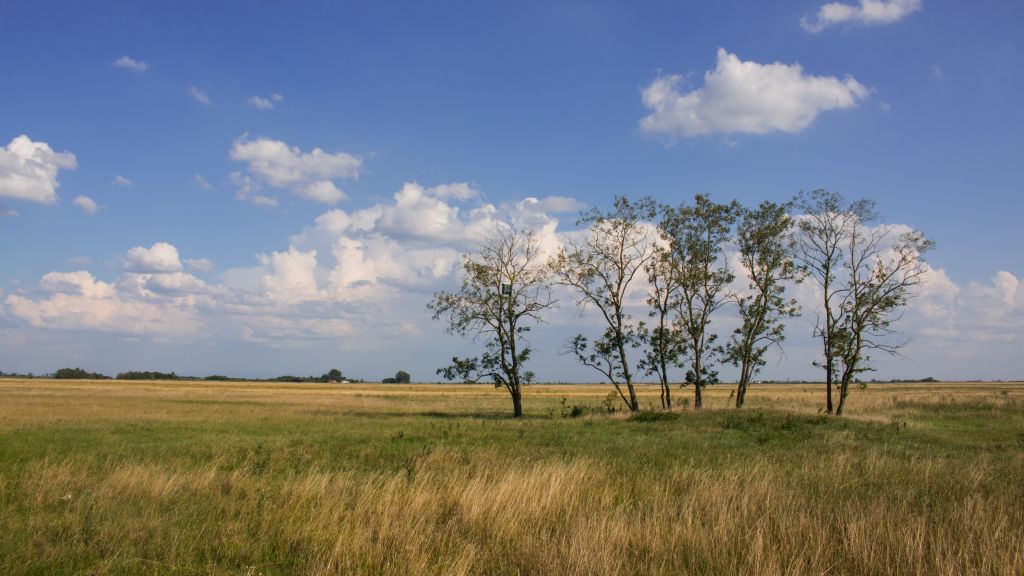 Other Natural Assets in the Salonta Area

Plants, insects, invertebrates, reptiles, birds, and mammals that belong to the natural heritage of Salonta.

It is a native European fish species, rather typical to marshes with draining tendencies during summers, but which are filled with water in spring and in most of the year. It can be found in shallow waters, in older bayous and murky streams, especially with rich vegetation. The weatherfish lives in poorly oxygenated waters comes to the surface now and then to swallow air,  which then is eliminated immediately through the anal orifice. While the air travels through the alimentary tube, the walls of the posterior intestine are retaining the oxygen for the so-called gut air-breathing. Should it be taken out of the water suddenly, the eel eliminates the gut air through its anus, producing thus a faint shriek. Some time ago, people used to catch weatherfish and prepare them in various forms. The weatherfish survives the droughts by burrowing in the mud. Hence the scientific name fossilis, which means taken out of the ground or unearthed because it was in those places that people would dig up the fish out of the mud. Weatherfish can be found in this area in larger canals and in runlets with slow-moving, or standing water. 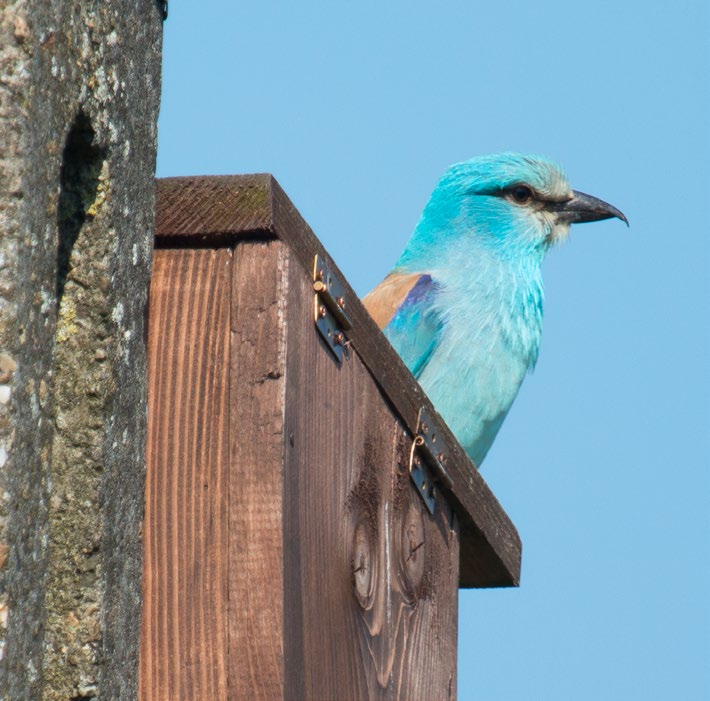 This is a protected species within the EU and Romania, and its major population lives in the Carpathian Basin. The majority of the Romanian population is to be found in the western part of the country, whereas in the Transylvanian Plateau, may be seen only during migration. A few years back, there were only a few pairs in the western part of the country, i.e. in Banat and Crisana. Thanks to international conservation programmes, more artificial nests were placed in the area, and the population in Bihor balanced itself out, grew and started to expand to the north. Presently, the third largest and most stable population lives in the Salonta-Cefa region in western Romania. 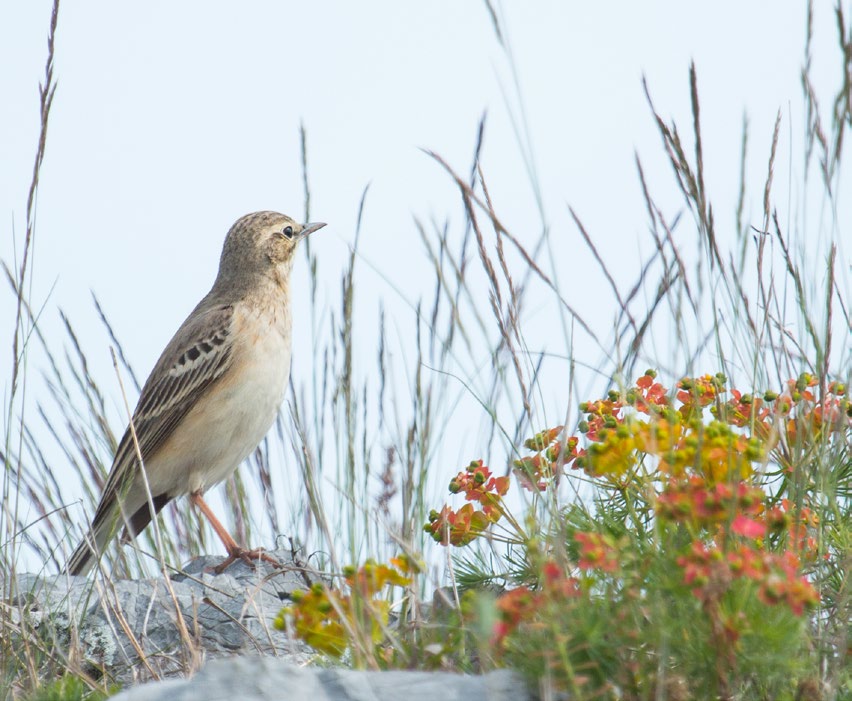 It is a bird that has no particular features as regards its looks. It's not very popular, and not quite rare either. In other areas may nest even on agricultural lands, but in the area of Salonta, it rather prefers the grasslands and the fallows. The conversion of grasslands into arable land and the intensification of agriculture are its worst imminent threats. The Tawny Pipit populations have plummeted within the EU, which is why now it is protected. In Salonta, they can be seen on the saline soils and drylands. 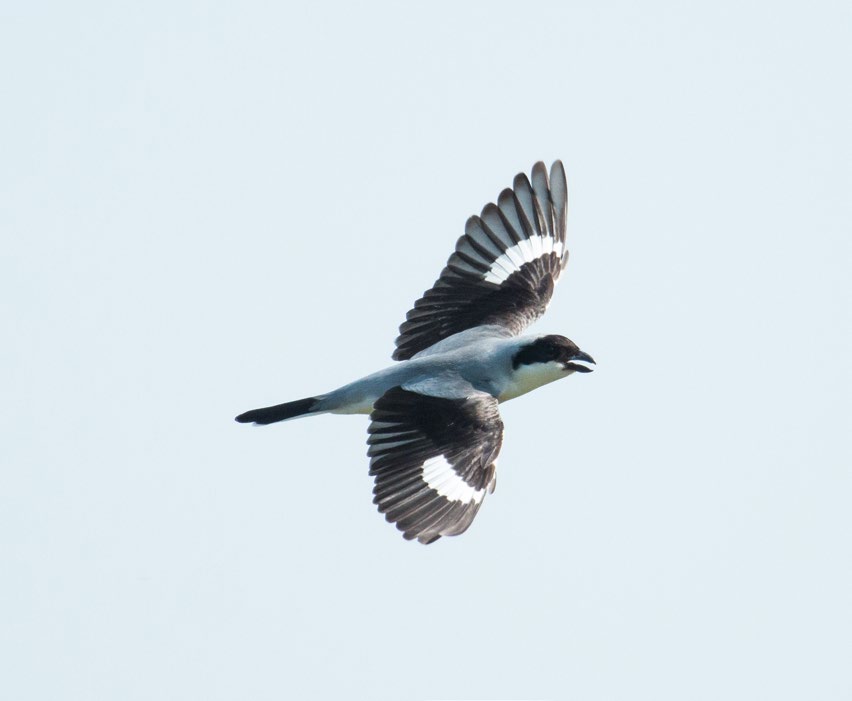 The largest European population lives in Romania. It can be found almost in the entire country with the exception of the highlands. Because of intense farming in Western Europe, the number of invertebrates decreased drammatically. As a consequence, their food sources have drastically dropped. Another threat to the species is the cutting of roadside trees, which can provide good nesting sites. The Lesser Grey Shrike is a typical species for the acacia clumps in Salonta and for the trees that grow on the grounds of abandoned sheep yards and farms. 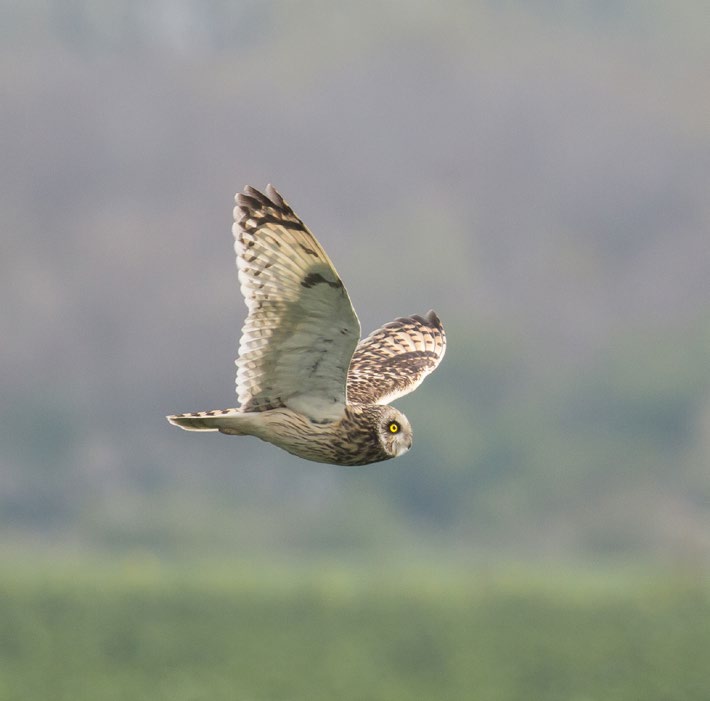 Is a very rare owl species in Romania - there are only a few dozen recorded in Romania every year. In Salonta, the species can be seen on a regular basis, especiallyduring the winter, except for the years with vole explosion, when it might as well breed in several places. This is the only owl species in Romania to nidificate, i.e. to build its own nest. It lines a hole in the ground with grass. It prefers grasslands, but nests have also been found on agricultural lands, from where they usually get their food. Thus, te use of chemicals and the expansion of monocultures are threatening this species.

Even though the Montagu's Harrier is breeding in almost every country in Europe, it is quite a rare species. It has been estimated that the population in Romania is below one hundred pairs. Like the bustard, the Montagu’s Harrier relies on grasslands for nesting.

However, nowadays it may nest on agricultural lands. As a result, early tillage may compromise its nests. That is why agriculture plays an important role for the species. It nests regularly in the Salonta area and, in the years when Common Voles are in huge numbers, the number of breeding pairs increases significantly. 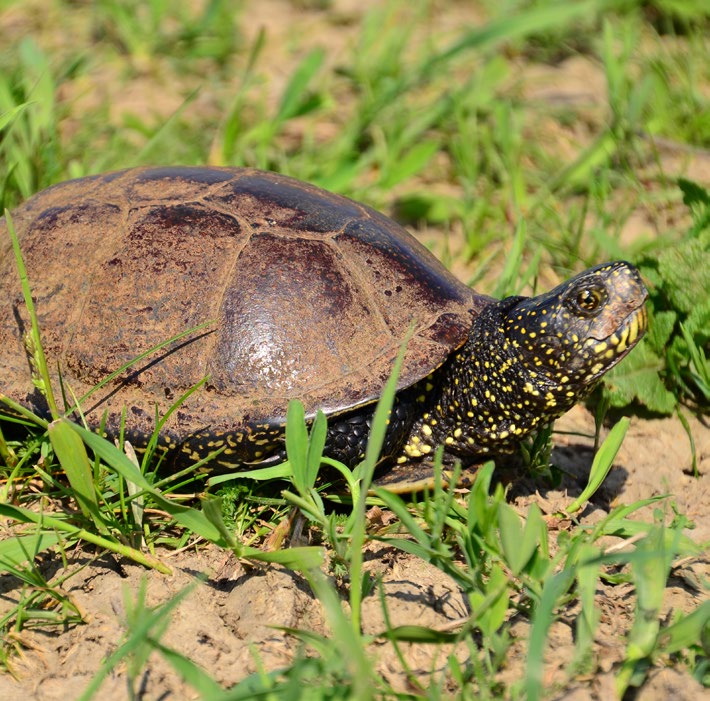 This is the only native water turtle species in Romania. It needs vegetation by still water or stream bank, where the young and juveniles can hide, but also sandy soil to lay the eggs. One can often see it laying in the sun, either on a tree trunk in the water or on an undisturbed riverside. By ensuring these conditions, we can contribute to the conservation of the species. Because of the desiccation of its natural habitats, namely the former vast wetlands, the species was forced to move to other man-made places, such as canals with abundant water or ponds. Thus, canal dredging represents a real threat to turtles. In the area of Salonta, turtles can be found in larger canals and in regulated streams, like Corhana, or Culișer. 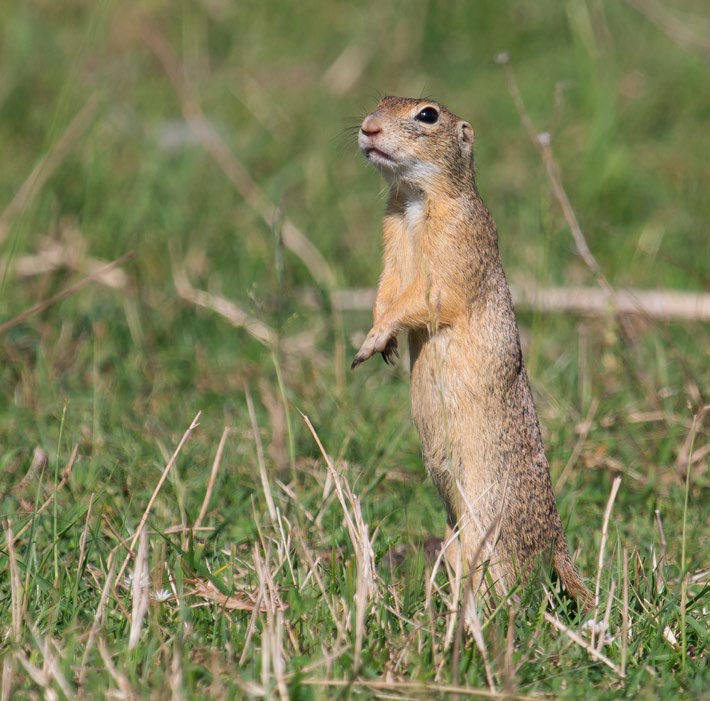 This European endemic species is strictly protected nowadays. Mostly because of the fragmentation of its habitat, it has become a globally vulnerable animal. Various pest-control methods were used to eradicate it during the last century as it was considered a rodent pest. It lives in colonies, where each individual has its own burrow system. The European Ground Squirrel plays an important part within the ecosystem of grasslands, and its conservation is vital for many other species. Its underground burrows are used both by reptiles and amphibians, and it is the main food source of the Saker Falcon, Eastern Imperial Eagle and Steppe Polecat. It may be spotted very rarely on the outskirts of Salonta, as it has been observed only to the east of the Barmod Plain, near the state border, opposite the Hungarian village of Kötegyán. 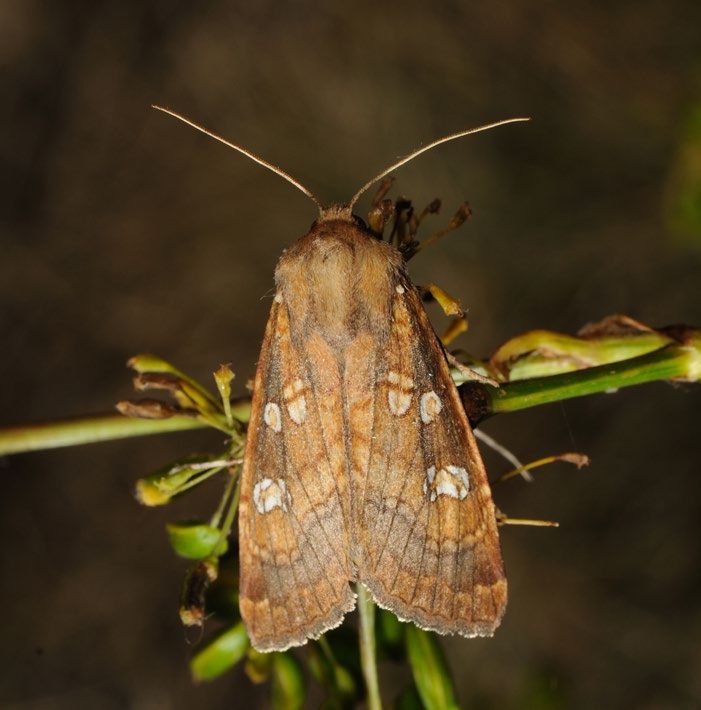 This is a nocturnal moth and it is considered endangered across Europe. Its largest population lives in the Carpathian Basin. It prefers the drylands with saline soils and also the saline swamps that have a tendency to dry out. This species prefers the same habitat in Salonta, as well. The larvae of this moth may develop on a single plant, that will also feed upon - the Hog's Fennel (Peucedanum officinale), a perennial plant that can be found on the meadows of Salonta. The moth is threatened by the conversion of meadows into arable land, by their inadequate land management and by intensive grazing. 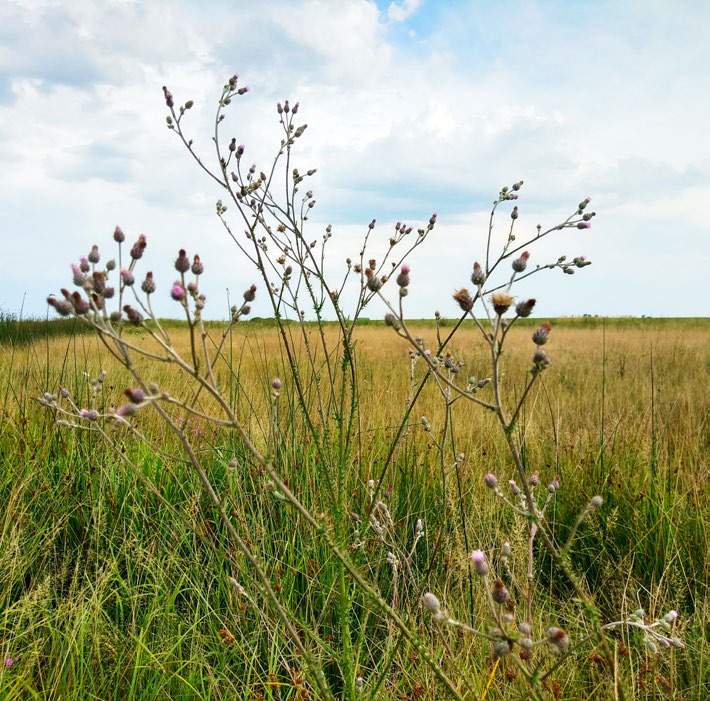 It used to be considered endemic to the Pannonian Basin, but lately, it has been observed also in the Transylvanian Basin. It grows mainly on meadows and saline swamps. Desiccation and tillage undergone in its habitat represent the main threats for this species of thistle. Because of intensive grazing, it has been rarely noticed on the meadows of Salonta. One can only see it on the wet patches of older fallow lands, and on the swampy edges of saline soils.