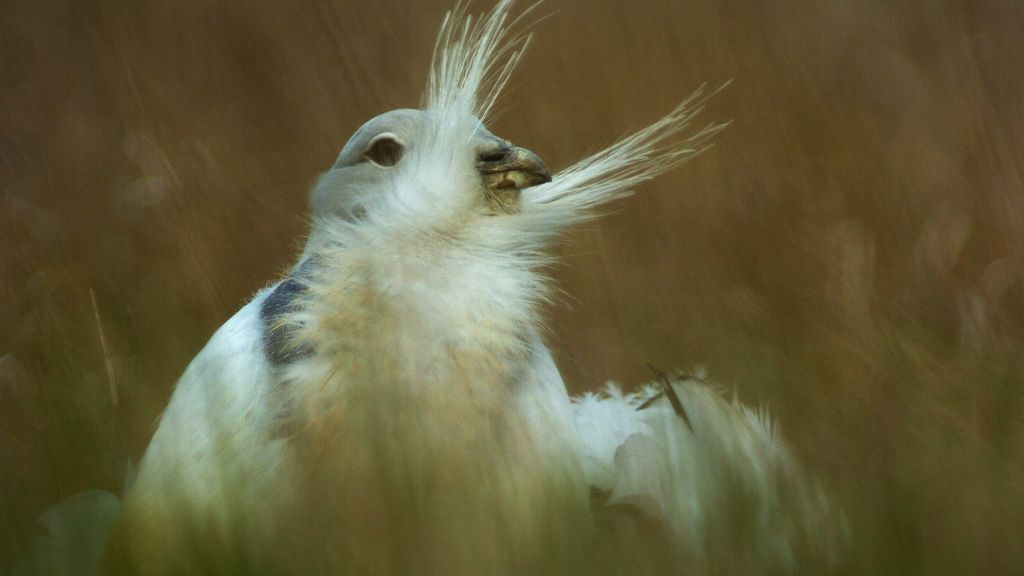 The breeding season starts in March-April with a spectacular courtship called display.

The males have traditional display places, where they defend their individual territories (leks). Their delimitation is done through repeated flights under the form of a circle, and starts at the end of February. Every male bustard has his own lek. The arrival of another male bustard or the presence of younger males may generate conflicts. The males become sexually active at 4-5 years and the females at 3-4.

During display, the male bustard moves his body so that his white feathers show, thus the females are attracted from miles away. The male strikes that pose in 5-6 seconds and keeps it for half a minute. In this time, he proudly shows the white plumage and dances for the females, encircling them. Following a 2 or 3 minute break, the male resumes the white snowball pose. He needs this break in order to eliminate de 10 litre air that he accumulates in his gular pouch.

The females approach the lek and choose the male that they find the most attractive. Generally, the male flaps his wings while he surrounds her. The mating takes place if the female shows signs that she is willing to mate, and therefore, she will sit on the ground near the male. Subsequently, the male continues to dance waiting for other females to mate with. The strongest males will mate with more females and the weak ones with one or none at all.

The three phases of the Great Bustard display:

• the bird flips over onto the back his tail feathers kept tight, thus showing his white undertail feathers. He starts to inflate his gular pouch;

• he manages to fully inflate his neck, lowers his wings. By inflating the pouch, the head is tilted backwards and the whisker feathers will stick out into the air;

• the wings are lowered on the ground in a Z shape. The primary feathers are tensed towards the back and the secondaries are twisted upwards like a bouquet, covering the coloured feathers.

There is no close relationship between the male and the female Great Bustard, neither monogamy, nor polygamy. Even the females may mate with more males, and so does the dominant male, who could mate with quite a number of females.

Also at this time of the year, the young bustard males who are not yet sexually active are practising the display. They will train their bodies: the neck skin is yet not that flexible to be inflated and the wings cannot be fully bent. Repetition is the mother of learning when it comes to courtship, too - they practice a lot and sometimes they will get closer to the mating males in order to watch attentively the “process”.

After mating, the female bustards leave the leks. At the end of the breeding season, the males will occupy a territory in the surrounding area within a distance of a few kilometres of their leks. Female bustards usually nest in groups, farther from the leks or on the male's territory. Some females even have permanent nesting sites. Male bustards tend to stay near the females, so they could mate again should the chicks not hatch. Females lay eggs once a year, but if the incubation is compromised, they will lay again, usually only one egg.

The nest is most often made on meadows, fallow, in lucerne, or even cereal plots. An important factor in choosing the nesting site is the height of the grass, because it is vital that it conceals the females. The nest is not too deep, with a 30-40 cm diameter, merely a scratch on the ground. Females lay between one and three eggs, but in most cases they lay two. It's been observed that the clutch size is bigger when the nest is on agricultural lands, probably because there’s more food available than in their natural grassland habitat. The eggs are olive green with brown spots, which serve as a perfect camouflage in their environment. Eggs of light bluish colour have been observed as well. These are usually either the female’s very first, unfertilized eggs or are just simply pigment-free. After she has laid all of her eggs, the female incubates them for 24-26 days. In this time, she would leave her nest only for food and will not wander over 100 meters. The chicks are nidifugous (they are able to leave the nest immediately) and are quite robust - they have feathers and can move. A few hours after the hatching, they are able to follow their mother, who feeds them for two weeks.

After that the chicks become independent, but they tend to stay in the proximity of their nest. The chicks can fly when they are 7-8 weeks old, but the family stays together until they will be part of the larger drove in autumn. Most recent findings according to telemetry results show that even the older chicks, that are able to fly prefer to walk short distances and they only fly if really necessary. Unfortunately, the mortality rate is very high among chicks; half of them will not survive their first year. The causes are multiple: on one hand, because of natural predators and, on the other hand, with a higher prevalence, because of mechanized farming works (harvesting, motorized mowing).

In autumn, the females with the juveniles that were raised in the same area will form a drove that will move and feed together. The males will form a different group. The two droves will feed separately, but they will often be close to each other. In severe winters, the droves may combine and feed altogether.