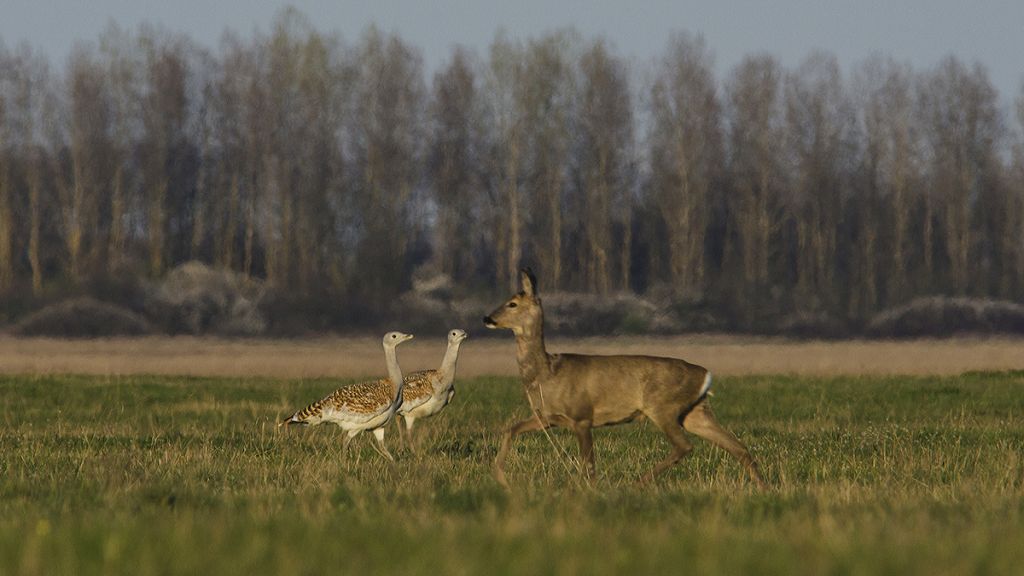 Did you know that the Great Bustard has its origins in Africa, over 25 million years ago?

The Great Bustard is a globally threatened species, that may be saved only by international collaboration. As its once vast habitats have been fragmented (or even completely destroyed), by mid-1950s, the bird disappeared from most parts of Europe. Nowadays, populations still exist on the Iberian Peninsula, in the Carpathian Basin, Germany, Ukraine and on the lowlands of Russia.

The Central European populations are very vulnerable as they became isolated. So is the case for the population within the Carpathian Basin, which has shown a continuous distribution during the first part of the XXth century, nowadays is heavily fragmented. The main cause is intensive agriculture, grassland conversion into farmland, but also infrastructure development. The actual European population within the EU member states is around 31,000-36,000 individuals. The species is protected under many international conventions, to which Romania has also adhered. [the EU Birds Directive – Annex I, the Berne Convention – Annex II, the Bonn Convention, CITES - the Washington Convention – Annex I.]

The traditional habitat of the Great Bustard is the Eurasian steppe, but the species has also adapted to agricultural lands managed extensively. The bustard could only partially adapt to intensively managed farmlands. Once an emblematic winged species of the steppes, nowadays is mainly associated with the agricultural landscape. In the area of Salonta, Romania, bustards can be seen in the open mosaic habitats, that include grasslands and agricultural lands used for crops, such as Leguminosae (lucerne, clover), oilseed rape or winter cereal grains, which are part of its diet. The bustard is very sensitive to any disturbances on its territory.

The display (their mating ritual) areas are on grasslands, and they nest primarily in their favourite crops, by scraping a pit in the ground. In Europe, bustard populations are to be found even in areas where there are no grasslands at all. Here, the bustards are completely dependent on agri-environment programmes. These bustards that cannot display on grasslands, use agricultural lands for their mating ritual: heath, fallow and arable lands.

Generally speaking, the Great Bustard is a sedentary species. With enough food resources, it will not leave the breeding grounds during winter. The bustard eats lucerne and oilseed rape green leaves, the latter being its main food during the cold season. To find good feeding and wintering grounds, the birds may travel over 50 km long distances. But as soon as the thick snow or ice cover prevents them from getting to their food, they will be forced to leave. Should winter start in such unfavourable weather conditions, their migratory instinct will be activated and they will spend the winter in the Balkans or the Mediterranean area. If severe weather sets in mid-winter, the bustards will migrate only on short distances.

A great number of birds perish during migration. The main cause is the collision with power lines. Yet another threat is poaching that can occur on their migration territories. If we provide them with food during winter, they will not migrate and we can keep them in their area, thus contributing to the conservation of the local population.

As for appearance, the Great Bustard has the size of a turkey. Males are much larger than females, and they may weigh up to 16 kg, while a female weighs between 4-6 kg. Even if they can fly, they spend more time on the ground. Bustards have their legs and feet adapted to running – three forward-pointing toes and no hind toe. Their plumage is greyish and dark brown.

Males have bright colours - brown, black and scarlet, on their wings and breasts. Females look more pale and neutral, which allows them to hide more efficiently in their environment. Another typical feature of the male birds is the whiskers that grow on both sides of their beak. These are modified feathers with an average length of approximately 20 cm. They start to grow in early winter and reach their maximum length during the display season. The length of the whiskers is directly linked with body weight and plays an important role in the visual communication between rival male bustards during display. These are warning signs for potentially aggressive males, as they ensure a hierarchy amongst males. In spring, male bustards show a typical scarlet collar around their neck. Great Bustard chicks are yellow-brown with black stripes or spots, giving them a most useful disguise. Their wing and tail feathers start to grow 18-20 days after their birth, and they learn to fly when they are 40 days old.

The Great Bustard is an omnivore and eats generally plants, seeds, arthropods, molluscs, small mammals or even bird chicks. Its menu changes seasonally, depending on the availability of food resources and on the bird’s needs.

In early spring, their diet is plant-based – oilseed rape, lucerne, wheat are all available rather than insects.

Starting with May, the arthropods appear in their diet, and they will remain present until fall. This protein-rich food plays a significant role during the breeding season, and especially in summer, during their moulting, when they need more energy and proteins to change their feathers.

In autumn, plants become once again their main food source - grain seeds, but also the tender stems of the fall cereal grain crops, out of which the oilseed rape is their favourite.

In winter, they have a similar feeding habit. They usually spend the winter feeding on oilseed rape, and when the snow covers the land, they often join roe-deer herds in order to feed on the plants that the deer would scrape with their hoes.

The chicks are on a different diet than the adults. Until two weeks old, they are fed exclusively with insects, a food source rich in proteins, that can sustain the fast growth. At such an early age, their body can’t process plant-based food because at this point their intestinal bacterial flora has not been formed yet. Therefore, they gradually switch to plants.

As in many other places in Europe, in Salonta, agriculture plays an important role in the life of the Great Bustard: be it for the farming techniques, the size of the plots, or the composition of the crops. Besides the conservation of grasslands, lucerne and oilseed rape crops, it is extremely important that production would be grown without chemical products. Should the chicks not find enough insects, they will not survive their first two weeks. As for the adults – without a high energy food source, they will not be able to cope with the challenges during difficult times.