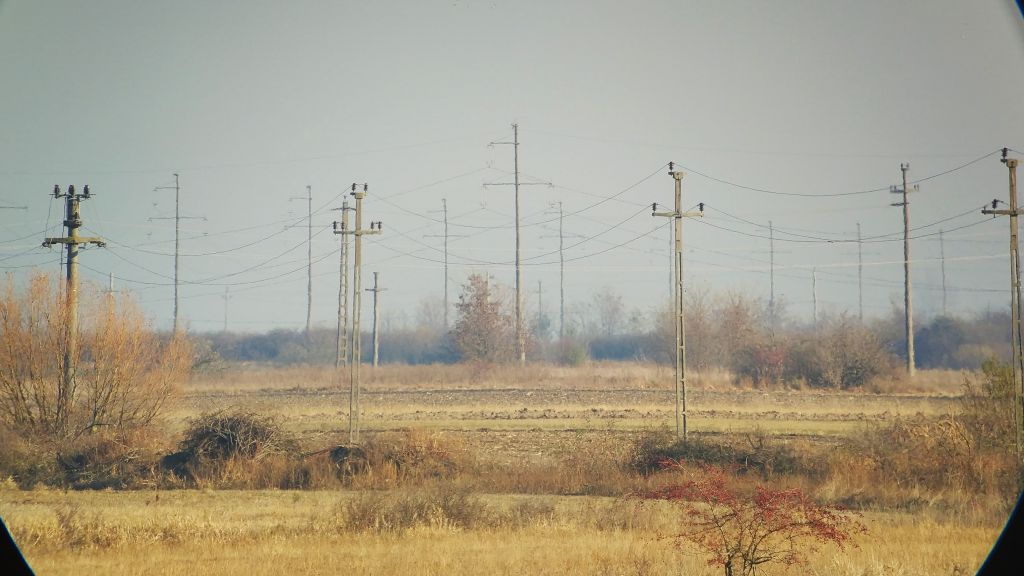 Collisions with medium-and high-voltage power lines are some of the most common risk and mortality factors for large birds.

- Just like other species, the Great Bustard is threatened mainly because of habitat loss. Initially, the grasslands were the bustard's habitat. Fortunately, the species has adapted to the environment of cultivated plants. However, without proper crop rotation, it cannot survive on agricultural lands. Over the years, the bustard's territories have shrunk and its habitat has been fragmented, making it more difficult to sustain viable populations.

- The declining number of invertebrates (mainly insects). The lack of insects from the adults' diet may negatively affect the reproduction rate, but for the chicks, it may be fatal. The main cause is the use of pesticides, insecticides and chemical fertilisers.

- Different types of disturbances and intrusions, such as agricultural work, off-road racing motorcycles and quads, or the presence of man. The birds are highly sensitive to intrusions, especially during the mating and nesting season. When disturbed during display, mating will not occur and the female will lay unfertilised eggs. If the female is disturbed while incubating, she will leave the nest and might not dare to return. If they come back after a long time, the eggs can cool and they won't hatch.

- Mechanised agricultural works may kill the chicks when they are still unable to fly, especially while harvesting, spraying with chemicals or during mechanised mowing (i.e. lucerne).

- Many birds perish because of collisions with transmission power lines. The medium-and high-voltage power lines are the biggest threat to large birds, such as the Great Bustard.

- Predation, once a natural factor, now represents a danger to the bustard. As a result of anthropogenic activities, the number of natural predators increased. Fox populations - a bustard predator - used to be kept under control by wolves and jackals. But these species either disappeared from these areas or are present only in very few numbers. Rabies could also lower the number of foxes, but the chemicals that are scattered from aeroplanes prevent this from happening. Beside the fox, the growing number of shepherd and stray dogs is another threat.

For the conservation of the Great Bustard, several action plans and international conventions have been designed. Most signatory states also issued national conservation plans for the species, through which they carried out clear conservation actions. In Romania, the protection of the bustard is making only its first steps. In 2017, a practical measure has been made official: the agro-environment scheme for the conservation of the Great Bustard. Under the Bonn Convention, a memorandum was drawn up to conserve the central-east European bustard Memorandum of Understanding on the Conservation and Management of the Middle-European Population of Great Bustard). Romania signed this agreement in November 2000 at the IUCN World Conference in Amman, Jordan.